The recording was made on spring 2014 at the Beethoven hall of the Bolshoi theater. Sound engineer – Nadezhda Nikolaeva.

You can also check how the recording of one very important episode of the Svetlanov’s piece was done. See the video on Facebook.

The Bolshoi Theater is universal, as it contains all—opera, ballet, and symphonic, choral and vocal concerts. This kind of diversity is normal for the leading opera houses of the world. The Bolshoi can perform a variety of music – from ancient to modern, from sizable theatrical compositions to delicate chamber scores. A harmonious orchestra is made up of individuals who are able to hear each other. Attunement to each other is skill they have acquired in chamber ensembles, where each participant is a soloist. A musician fully self-actualizes as a creative person, when he can perform as a part of a large orchestra and ensemble. One of such ensembles is the brass quintet.

The woodwind quintet was formed in European music at the beginning of the XIX century. “Wood” is used in the name despite the fact that only three of the five instruments – oboe, clarinet and bassoon – are made of different kinds of wood. Modern flutes are made of metal and the horn belongs to the class of brass instruments. All the instruments are very different in tone, and difficult to mistake for each other, but it is their combination that generates a rich spectrum of sound and provides the composer with an opportunity to create works as rich as the music written for string quartet or piano trio, for example.

In the middle of the XX century, the Woodwind Quintet of the Bolshoi Theatre was one of the most renowned chamber orchestras in Moscow, and the best artists of the Bolshoi Orchestra performed in it. The Quintet performed in the theater itself, and also toured independently. The Quintet participants were members of the famous Ensemble of soloists of the Bolshoi Theatre, conducted by Alexander Lazarev, who introduced the Soviet listener to a rare repertoire and left behind an extensive discography. In the 1990s the Quintet had ceased to exist. Today, it is reborn anew – on the initiative of horn players themselves, with eager support from the management of the theater. In its concerts in the Beethoven Hall of the Theatre, the Quintet presents a series of programs featuring European, American and Russian music, and performs a lot of arrangements. The Quintet plans to devote its first disc to music of the motherland.

There are not that many works for a wind quintet in Russian music. But the ones that exist span a wide range of eras and styles. Of course, the musicians of the Bolshoi Theatre could have created a program for this CD around arrangements – but they decided to go a different way. The Quintet chose only original compositions – and when there was not sufficient existing music, the members of the ensemble filled in the gaps themselves, acting also as of composers. The result is a program, which presents three centuries of Russian music, including both romanticism and traditionalism; the avant-garde and modern whimsy.

Alexander Alyabyev (1787 – 1851) – “The Russian Schubert”, the author of popular operas and musical comedies, the creator of the world-famous romance “The Nightingale”, the brave hero of the War of 1812, a hussar and a big-time gambler and hussars, who, in his midlife, was exiled to Siberia for a murder he was never proven to have committed. The one-piece brass quintet, one of the few chamber works composed by Alyabjev, is not the product of a naive amateur: Alyabyev in his youth was seriously engaged in study with the contrapuntist Miller, and the piece demonstrates his mastery of the polyphonic technique, as well as the art of thematic development within the quintet. The piece is written in sonata format. In the introduction and epilogue, the author’s beloved sad elegiac style is evident; the main theme features the robust spirit of classicism, and the second theme evokes an Italian opera.

Sergey Lysenko – Soloist of the Bolshoi Theatre Orchestra. Although his Fantasy is based on themes by Tchaikovsky, the listener immediately feels that the piece was written by a modern composer, one, who among other things, is familiar with jazz. The Fantasy opens with a burial service for the tragically dead German, and then—as in a flashback in a movie–the story is “rewound” to the beginning. The author insists that the story in his fantasies is from German’s perspective. In the course of the story, German, like jumps, Batman-like, from the Summer Garden into the bedroom of the Countess, attentively delves into a short story by Tomsky, intensely considers the issue of the three cards, meets the ghost of the Countess, and repeats her song, and the Fantasy ends with German challenging fate in the midst of a thundering. Sergey Lysenko, relying on the virtuosity of artists Big Wind Quintet Quintet, set for himself a challenge – to convey all the glory of Tchaikovsky’s orchestra with only five instruments. And he succeeded.

Edison Denisov (1929 – 1996) – the guru of the Soviet avant-garde, who, in defiance of the official aesthetics, implemented the principles of “new music” into the nation’s musical life, teacher at the school of composers, the first president of the revived Association of Contemporary Music. None of this prevented him from writing a touching theme for the film “The Nameless Star.”

To the contemporary ear, Denisov’s Quintet is quite academic: it includes virtually no non-traditional methods of sound production. The Quintet is in two parts. The composer himself compares the first part to a nocturne, and the second to a scherzo; the latter, we might add, includes an appearance of an unpleasant biting creature akin to a small little dog. In the first part of the piece, the five instruments carry five separate lines in a polyphonic style, and in terms of the rhythmic pattern, none of the voices match the other ones. But the second part is strictly synchronous: in terms of form, it is a variation on a rondo, dominated by sharp chords played  “stakkatissimo” – the author compared this to piercing holes in a piece of paper, between which “sounding pauses” are located. For the performers, in a way this is a test of how harmoniously they play, and the feat would be impossible without the aid of a conductor. 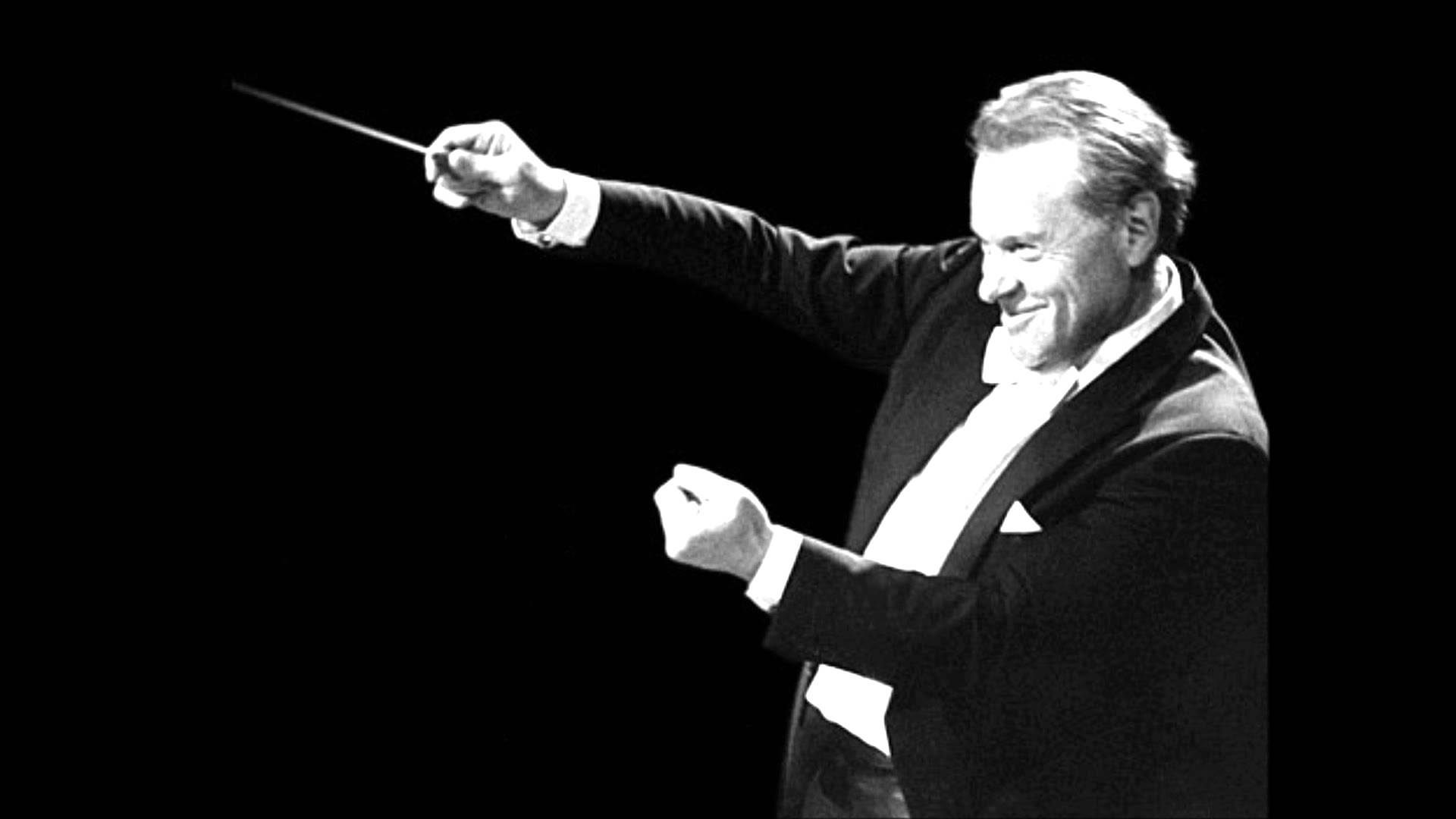 Евгений СветлановEvgeny Svetlanov (1928 – 2002) – a great conductor, for many years the head of the USSR State Symphony Orchestra, who recorded the canonical anthology of Russian music. He was also a pianist and composer, and his most famous work is the music for Vasily Shukshin’s  film “Kalina the Red.” For his funeral, Svetlanov banned all speeches, and left instructions to only have his music played.

Suite “Village night” was written for soloists State Orchestra, and this is the recording. It represents an idyllic picture of the world rarely found in XX century art.  The composer admires the Morning, as if lingering in bed and contemplating the sky in the ethos of the French Impressionists: unable to move away from one single harmony and using only six notes. Svetlanov’s Noon is dedicated to idleness – a village decorum dance. Evening bring a nuance of anxiety: this piece has a feeling of a fair that has gone on too long—it is time to disperse, and the fun is taking on darker hues and becoming fraught with disaster – whether consciously or not, Svetlanov invokes a criminal element in his music, using the intonation of Choir of smugglers sneaking across the border at the beginning of act 3 of Bizet’s “Carmen”. But Midnight is against idyllic, typical of the best pages of Russian music.

Nikolai Popov – a soloist of the Bolshoi Theatre Orchestra – in his opus has adopted the idea of ​​Camille Saint-Saens, the creator of the famous “Carnival of the Animals.” Each piece of the cycle is a caricature of sorts, where the objects of caricature are the members of Woodwind Quintet of the Bolshoi Theatre  themselves, as well as the instruments that they play. The singing elephant is Alexei Rayev and his horn, the Dancing Penguin – Sergey Petrov and his clarinet, the Furry Bumblebee – Sergey Lysenko and his oboe, the Love Goose – Andrei Rudometkin and the bassoon. The Turtle is a self-portrait with a flute. In his creation of a cycle, the author was aided by his interest in jazz – jazz rhythms and harmonies are used in each piece, although by and large the Bolshoi Theater composer remains in his work a classical musician – no improvisation, the musical text transcribed in painstaking detail and tested a dozen times during friendly rehearsals.

The Woodwind Quintet of the Bolshoi Theater would like to thank the people and the company without which the recording of this disc would not have been possible:

Information support – ClassicalMusicNews.Ru
Development and maintenance of the official website of the Brass Quintet of the Bolshoi Theater – Boris Lifanovsky.